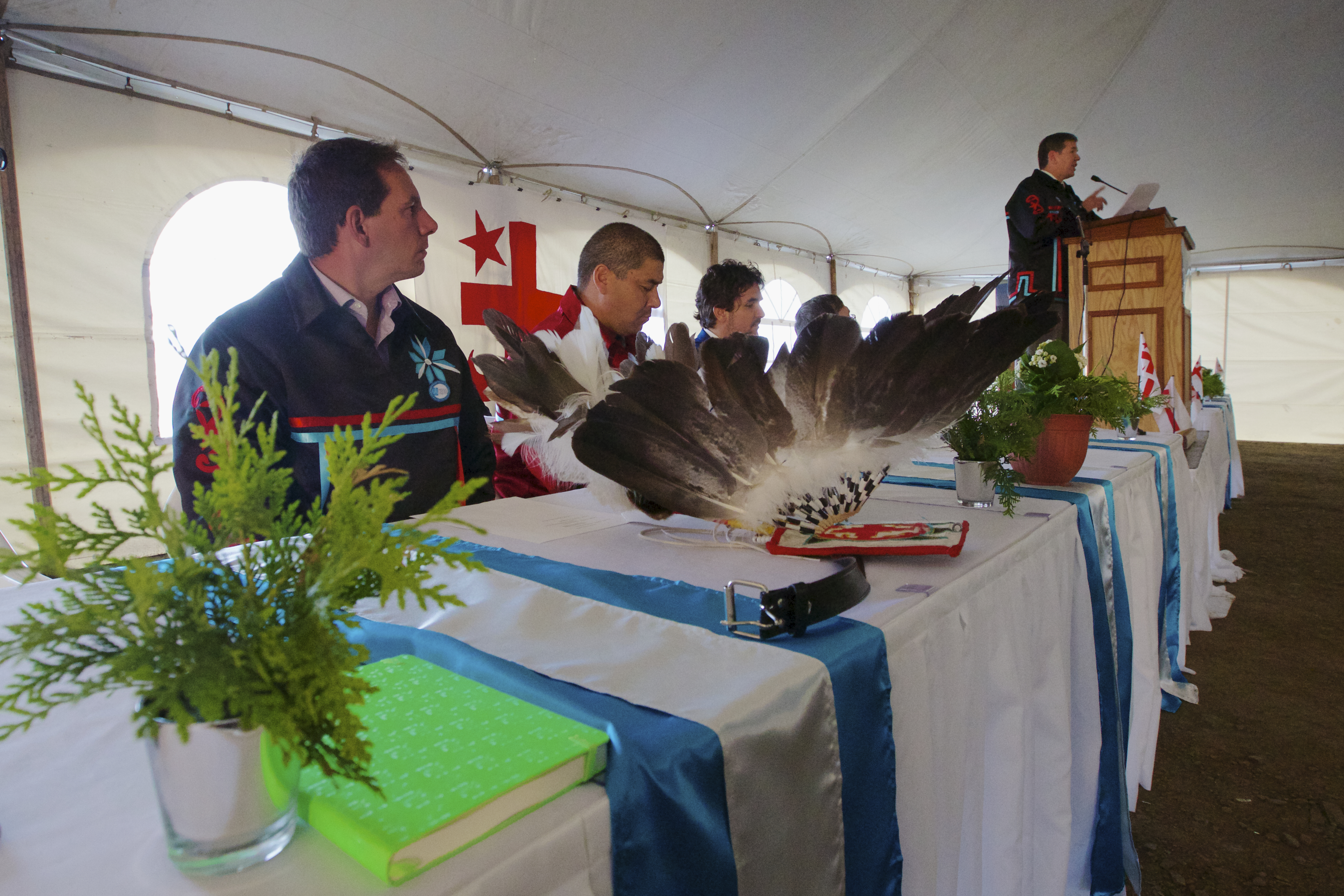 The official groundbreaking ceremony at the Mesgi’g Ugju’s’n Wind Farm was on June 22. Nearby Chiefs and councils were in attendance, along with members of Innergex Renewable Energy, nearby mayors and MLAs, the Assembly of First Nations Regional Chief Ghislain Picard, elders, and the Quebec Minister of Aboriginal Affairs Geoffrey Kelley.

“We did it in an aboriginal way,” said Troy Jerome, the Executive Director of the Mi’gmawei Mawiomi Secretariat. “We wanted to make sure the Mi’gmaq were incorporated into it. We had a group of young drummers sing the honor song.”

Jerome reported between 150 and 200 people in attendance, with shuttles bringing people from Listuguj, Gesgapegiag, and Gespeg to the site in the Avignon Regional County Municipality.

There were lots of reasons to celebrate.

Technically, it’s the symbolic start of construction. The land has already been cleared, and 28 Mi’gmaq workers are already there daily. But construction of the actual towers are just about to begin.

By the end of the season, 47 bases will be constructed.

“We have to put about 40-50 cement trucks in each of those bases, full of cement,” said Jerome.

The plan is to also burying cables this year. Next year the towers will be erected, and turbines will be installed.

This year also marks the completion of training – a major priority for the team.

“Our guys are recognized to work in Quebec now,” said Jerome.

The Commission de la Construction du Québec prevented many Mi’gmaq works from working in the province, even if they were experienced.

“By the partnership with them, we’ve managed to get people to take the exams, and when they go and write the exams, they’re passing,” said Jerome. “They’re already experienced, they just didn’t have the certification in Quebec. Now they’re certified.”

Jerome said the lists have already been made for the different trades during the construction phase, and more people will be hired as time goes on. However, there is still some training for young people who wish to be involved with the maintenance of the windmills for the next 20 years.

Jerome is careful not to credit luck – because a lot of hard work has been put in – but a lot of elements of the project are lining up nicely.

“Things are coming along – the right time at the right place, good relationship with the region, with the government on this particular project,” said Jerome.

The next major milestone for the project will be September 2016, when the blades start spinning, and the two-month testing period begins. By December 2016, everything should be operational and feeding electricity to the main grid – enough to power 27,000 homes.

In the meantime however, there is a big job – finding consensus on how the profits will be distributed.

“The first thing we want to do is put a time line on the table,” said Jerome.

A consensus building team is being put together to work with the communities. The goal is to come up with a plan, spend three months making sure all the community members are aware, and then sign off – all before any profits are generated.

The process will begin right after the summer elections in Gesgapegiag, and Gespeg – both of which will result in governments serving four year terms.