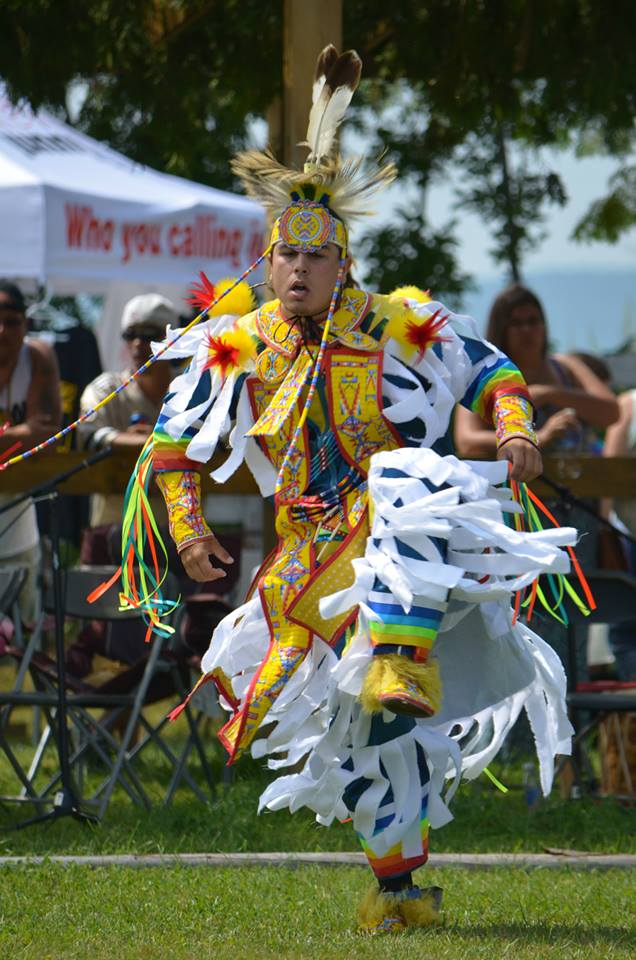 Craig was 20 years-old when he first danced at a Pow Wow. He had been watching closely as he traveled the circuit for awhile, but he hadn’t participated until one day in Nova Scotia.

“I was a nervous wreck the whole time,” he said. “I think it was like that for the first full year.”

The first Pow Wow he danced at typically takes until 11 p.m. to get to the adults.

“My coordination was horrible. I was off beat. I was stiff. But I mean – that’s most people. When you start off when you’re 20 years-old, you’re not just going to come in to it. As oppose to – you see some little kids starting off for the first time, and they just nail it right away.”

There was never any question of whether to continue or not. A drummer gave him some advice. He told him to attend some of the larger Pow Wows. Once you do that, the others don’t seem like such a big deal. He went to Schemitzun – one the biggest in North America at the time.

“When you first walk out on to the dance arena – it’s a good feeling when you look around, and you see 30 other grass dancers. Especially the ones that you’ve been watching for years.”

It wasn’t long before people began approaching Isaac, telling them that they enjoyed watching him.

“Just that stuff alone makes it all worth it,” he said. “You feel good yourself. It’s like anything else, when you’re about to do it – you’re nervous. Once you’re into the song – that all goes away.”

But Pow Wows are more than just dancing for Isaac.

“It’s something that I think brings families together,” he said. “Especially for me and my daughter.”

From April onward, they spend as many weekends as they can traveling. His daughter has been dancing since she could walk. And they often travel with the same group. They call them their “Pow Wow family.”

“It’s basically a big family you know, and everyone looks out for each other, and everyone helps each other out,” he said. “The kids love it, because they get to see each other every weekend. When you come home you know you’re going to see them again in a few days.”

They attend a variety of Pow Wows, both traditional and competition.

For Isaac, he enjoys the relaxed nature of a traditional Pow Wow and dancing just for the people, but he really likes competition Pow Wows.

He places often, even as an “old style” dancer.

Isaac is a grass dancer.

“It’s a dance that comes from the plains tribes. And it’s basically a dance that mimics patting down tall prairie grass,” Isaac said. “Like most of the dance styles at Pow Wows – they started to spread out across the nations.”

Like other dancers, Isaac started in the “contemporary style” and transitioned in to more of an “old style.”

“They’re both challenging in their own way,” he said.

Isaac explained that “contemporary” dancers will often incorporate all sorts of dance moves, including modern popular dance ones. It’s limited only by your creativity, he said.

“Old style is less flashy, more on the spot,” Isaac said. “Everything you do on one side, you do on the other side. It’s more smooth moving.”

And while “old style” may stay closer to a standard set of footwork, Isaac said there’s still plenty of room for individuality.

“You can transition them in your own style.”

Isaac agreed that “old style” dances are sometimes overlooked at competitions. But an experienced judge will know what to look for. And more and more dancers are being drawn to it. He said it is “making a big comeback.”

So far this year, Isaac has placed at the majority of the competition Pow Wow’s he has attended.

The nervousness may have worn off, but the excitement definitely hasn’t. Isaac intends to keep traveling with long-time friends and family for awhile to come.