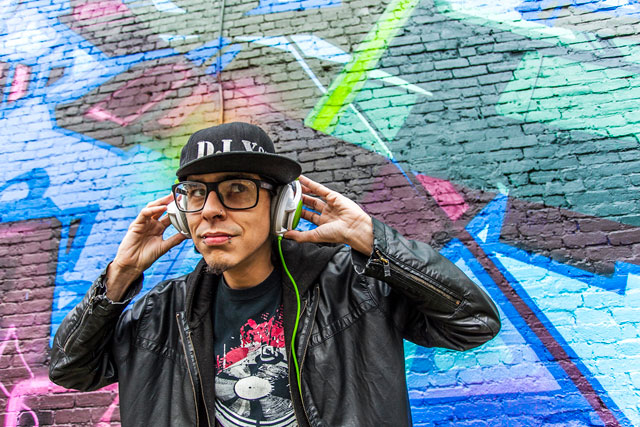 Alex Jerome has been building a career one step at a time. Gesgepegiac to Campbellton, to Moncton, to Halifax, to Toronto. Next – Europe, and rest of the world.

As DJ XS7, Jerome has been developing his skills for years. He now lives off his DJ career, and even won 4th place in Canada in the DMC DJ Championships in Toronto last year. It was his first year participating. He’s taking a shot at the world title this year.

He performed at Real Bar in Campbellton on March 11th and 12th — a location he’s familiar with.

He lived in Campbellton and developed a popular DJ night years ago, when “Rumours” was running. He’s also given workshops at the LMDC on entrepreneurship, and now has even more to share about his experiences developing a career as a First Nation’s artist.

“There’s tons of opportunities,” he said.

Whether it’s researching grants, or honing in on marketability, Jerome has been learning all about the industry. He’s been pitching his ideas, attending seminars, developing ideas for tours, and is even starting a record label with hip-hop artists in Halifax.

One idea of his particularly bridges traditional and modern influences.

“[It] tries to bring in a lot of the language, a lot of the dancing, a lot of the traditional heritage,” he said. “All that comes together with grass dancers and stages lights, black lights, and all such ideas. More on a futuristic level.”

He’s been working on it for three years, and says it is being well received now. This is partly due to recognizing the international appeal to an idea like this.

“Aboriginals get high amounts of respect on an international level,” Jerome said. “More than in Canada.”

Jerome sees these traditional influences as part of who he is, but also part of his competitive advantage.

“If you have aboriginal roots – try to tie that into your arts, because that’s something that nobody else can do,” he said. “That’s a part of you. That’s your heritage, and that should be a legend that you should be expressing. Within a new way. To new ears.”

A lot of Jerome’s music pulls from these influences, like “Highway of Tears.”

But he believes it’s important to develop a modern, personalized take.

“The hardest thing is actually to introduce your past, but in a new way,” he said. “For instance, I don’t dress in leather regalia, but yet, I have elements of the regalia kind of put into a modern, flashy, dressy kind of way.”

And while Jerome puts a lot of thought into all the artistic elements of what he does, he is also very conscious of the business, whether it’s paying to attend seminars and meet the right people, or ensuring the bar that hired him is happy with the night.

“Put it this way — if you’re playing constant hits, and the bar’s not full, or nobody’s drinking at the bar — the bar’s not happy,” he said. “You could have the best night of your life, but they would still not hire you.”

Jerome has learned to strike a balance — whether it’s creating a little lull after a few songs, or giving the crowd what they want.

But now it’s time to go bigger. Working his way from club to club, and city to city, has prepared him for festivals. He started playing them last year, and plans to devote a lot of his stummer to them this year. And this time, he’s just excited.

“Going to these festivals is pretty scary,” he said, speaking of the the first ones he attended.

His first time on a big festival stage, he didn’t even look up.

“I just totally stayed focused, and tried to do what I could,” he said. “I didn’t know what to expect. But this time around, it’s like going back to a bunch of old friends.”

He knows what it’s like now, and has had time to plan.

“Last year was all experience,” he said. “This year is all conquering.”