Blog - Latest News
You are here: Home1 / Community2 / Another Act of Resistance 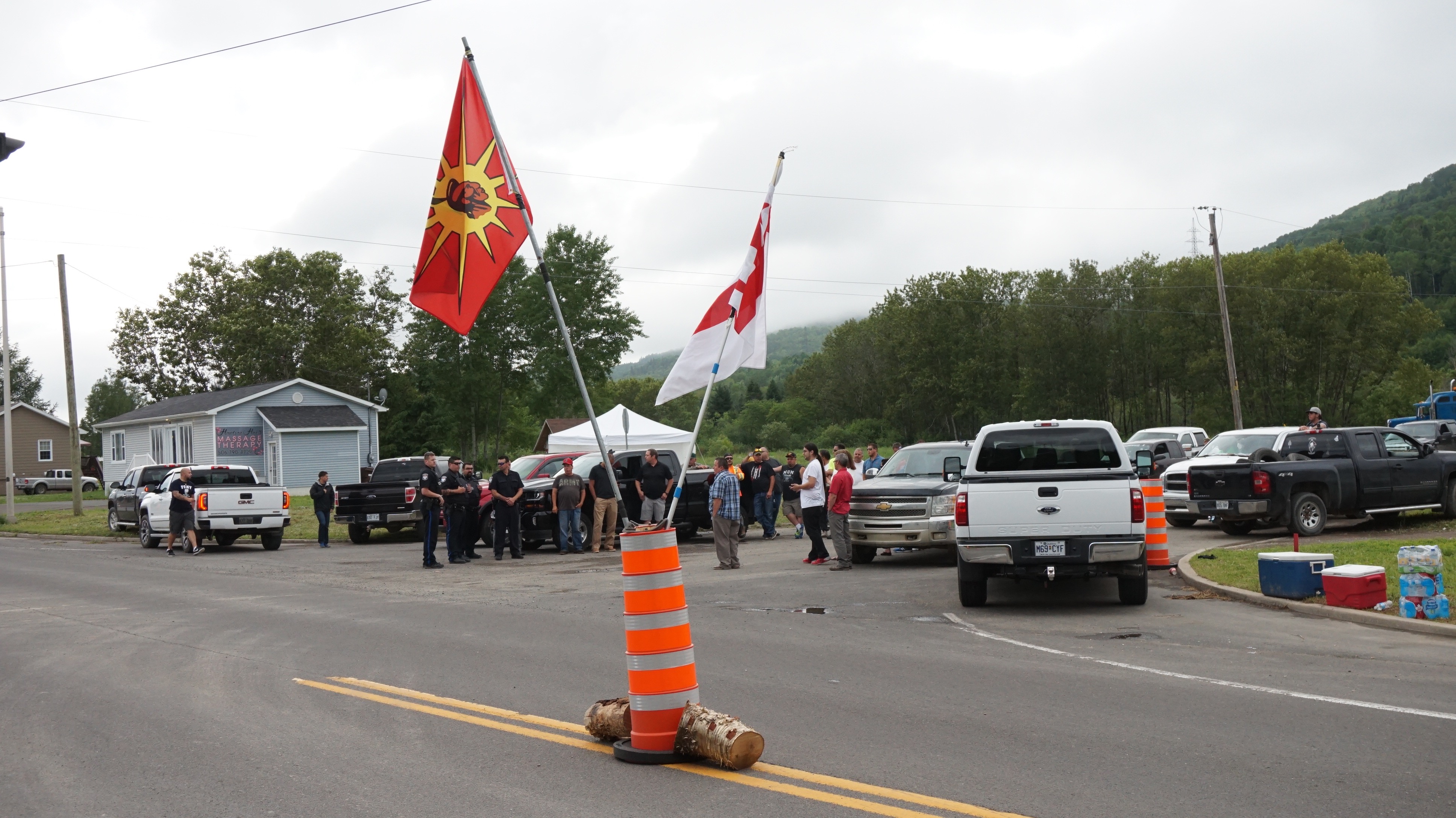 When representatives of the Listuguj Mi’gmaq Government and the Government of Quebec were talking on the phone, Listuguj loggers were already on the highway 132, ready to defend the exercising of Mi’gmaq rights.

The day before, Quebec had declared the wood harvested by the loggers  “illegal” and closed the market for these logs.  The GDS mill, the first main buyers, was instructed not to buy these logs because no stumpage fees were paid for them.

As the meeting started, the politeness faded and strong positions were taken on both sides. Quebec insisted on the payment, and Listuguj defended its Aboriginal right.

Chief Darcy Gray firmly expressed that “it’s not an option. We honor our people and we affirm that this is our territory and natural resources, and you stand in our way. Mi’gmaq people won’t pay taxes to access the resources of its territory.”

Geoffrey Kelly, Minister for Aboriginal Affairs insisted on payment before opening the market to Listuguj loggers.
“For most of the loggers, it’s their only income” said Alexander “Popoff” Morrison, the elected representative of the loggers.  His working crew includes four individuals that support families of three or more.  There are around 64 people working in the logging operations, and they and their families are all impacted by the outcome of the meeting.

As the meeting progressed, Chief, Councillors, the Director of Natural Resources and the logger’s representatives discussed the condition from Quebec — “Pay stumpage fees and we will open the market.”  The meeting was suspended for 20 minutes to deliberate, and when communication was reestablished, Listuguj response was unanimous in a diplomatic tone and very spirited tone from Councillor Wendell Metallic  — “This is Mi’gmaq territory and we don’t pay no fees for our natural resources.”

Quebec was also reminded about Mi’gmaq determination, and the many battles Listuguj has had to reaffirm and exercise its rights, including the 1998 blockade for the same issue.  Quebec requested a pause to the meeting.

Back at the highway, loggers and supporters were waiting and ready to block the road and stand up one more time.  But this time, Chief and Council were supporting the loggers.

The logging operations for the 40,000 cubic feet represents around six months of work, enough time to access the unemployment program for seasonal work.  These operations are mostly non-mechanical. Around 20 timber jacks, 40 guys with chainsaw and 25 guys hauling logs. Most of them went through the training provided by Listuguj Natural Resources and are certified chain saw operators, complying with security and safety regulations.

“In the past Quebec had issues with the security, safety, and harvesting practices.  In the last two years we have improved our standards to follow Quebec regulations”, said Listuguj Natural Resources Forestry Engineer Martin Cummings.
These concerns were resolved and the issue of  “paying stumpage fees as a condition to get a license was never raised in the past,” said Dr. Fred Metallic, Director of Listuguj Natural Resources.

Early in the meeting Minister Kelly insisted that these fees were necessary to cover the cost of fire safety, silviculture, and forestry management.  Listuguj pays between 15 to 20 thousand dollars for fire safety and they pay an engineer to manage the logging operations.

When Quebec called back after their deliberation, their tone was less adamant.  First the Minister insisted on improving the harvesting practices before announcing that Quebec would open the market.  Chief Gray agreed to open discussions, but insisted that any negotiation will be on the basis that this is Mi’gmaq unceded territory and no taxes of any form should be paid by Mi’gmaq loggers to Quebec to access natural resources.

After the meeting Chief Gray went to the highway 132 to tell the loggers about the outcome.  They celebrated, gave hoorays and high-fives.  Not long after the road was cleared, the flags were rolled back and they all went back to their families. Another battle in Mi’gmaq history.

For logger Morrison “we just bought time because the main issue was not resolved. However, I’m glad that the loggers are now consulted and supported” he said. For now, there are no further negotiations scheduled. The loggers are organizing a meeting before the Listuguj Pow-Wow.

In fact Quebec has one more time avoided talks about an important question according to Dr. Metallic.  “The Mi’gmaq tried to bring Quebec and Canada to the table to talk about the fundamental issue of land title.  We need to be able to decide and manage the sustainability of the forest not only for the Mi’gmaq but also for the Birds, the Moose, the Deer, medicinal plants, etc. It’s our home.”