The importance of Language and Culture is urged wherever it can be seen or heard. Whether it’s the Mi’gmaq Word of the Day, language classes at the Education Directorate or the Listuguj Mi’gmaq Development Center.

Several years ago, the Mi’gmaq Immersion Program was initiated at the Alaqsite’w Gitpu School. It has grown to include the Forest Kindergarten program, which has also grown exponentially since its inception three years ago.

Forest Kindergartens have been described as “kindergartens without ceilings or walls.” This concept originated in Germany in 1958, and has since been used all over the world – from Europe to South Korea, and now Listuguj

“It was just a trial,” she said.  “We noticed that it was running smoothly – and that the kids were benefitting from the program.”

During the first year, the outings with students could happen 2 days in a week. The next year it increased to 3 days. This year, students can now go out and learn every day of the week.

“I decided to continue to work with the kids daily, rather than just a few days a week,” Germain said. 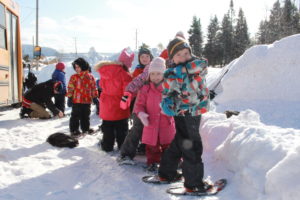 She quickly noticed the benefits the program has on the youth. The children`s enthusiasm for learning,  and the behavioral differences, simply from changing the setting from indoor to outdoor.

“There’s a lot of other benefits,” she said.  “The Scandinavian countries, when they started the outdoor program, one of the investigations and findings that they found is that the children got sick less often.”

Richard Louv – author of The Last Child in the Woods (2005) – coined the term “nature deficit disorder.”  He describes the disorder as the human costs of alienation from nature. Louv concludes that direct exposure to nature is essential for a child’s physical and emotional health, and that it’s vital for healthy childhood development.

Germain noticed that the kids developed better stamina, and that they learned to investigate. She described the program as a “inquiry based learning system.”

“Whatever they do outside, they learn from it – they’re the ones that look for what they want to learn,” she said. “They feel a sense of ownership to what they’re learning and once a child feels that way, they’re proud.”

Germain is always looking for ways to incorporate the core education subjects.

“They learn through natural play – if I were to notice that there are rocks, or that they’re counting sticks, I would try to encourage them” she said. “That is how I incorporate math into the outdoor program. I incorporate all four subject areas – math, language arts, science and social studies.”

The program has been so successful that others are taking notice. The First Nations Education Council were filming a documentary in Listuguj about it early this year. Germain and her colleagues have also been asked to build a curriculum to help train other First Nations communities on how to begin and grow their own outdoor programs.