Watching over the community

“How are you tonight?” Constable Jacob Renouf asks at a roadblock set up by the Listuguj Police Department (LPD) in front of the Education Complex. It’s near 10:00 PM on Aug. 5 — the start of the Powwow weekend.  Six officers are working, instead of the usual two.

Flares, and the flashing lights notify oncoming traffic. Constable Renouf greets drivers, and explains what they’re doing – just making sure everyone is being safe. The officers quickly shine flashlights in the car, and everything is in order. A few more jokes are made, everyone laughs, and the car continues on.

“How are you tonight,” Constable Renouf asks the next car.  The officers work their way through the line of vehicles that has formed, and then they pack it up. They’ll set up another road block later, but for now they’ll patrol.

Constable Renouf expects to drive the same streets dozens of times throughout his 11-hour shift. He has only been in the community for nearly a year. But he was on duty this time last year. He worked for the Gesgapegiag Police Department, which provided extra help in the past. No other police departments were needed this year. And the Powwow continues to grow.

Sgt. Detective Trapper Metallic has been with the LPD for over 15 years. He grew up here, got a summer job with the LPD, and got his training in Regina at the RCMP Academy, Depot Division. 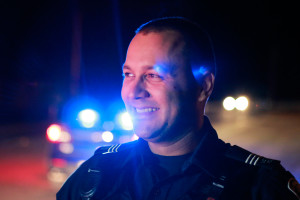 Sgt. Detective Trapper Metallic has been with the Listuguj Police Department for 15 years.

There were a couple years in his career, around Powwow time, when he would see an influx in incidents.  “Then we started to put some more guys on patrol, and start making it a regular thing annually. Then those stats start to go down.”

Police Chief, Peter Arsenault said that the incidents this year were “almost garden variety.”  “Everything went well,” he said.

While some may see operations like a road block as a nuisance, Arsenault hopes they recognize the true purpose. “I’d like to think that they’re aware that we have their best interest in mind,” he said. “Everyone is entitled to safety.”

Like most of the officers on duty, Sgt. Detective Metallic is also working extra hours, after his regular four-day schedule, through the night.  “To work extra hours is nothing,” he said. “It comes with the territory. Whether you’re 15, 20, 30, 40 – however many years of service you have – you come and work the extra hour, just to make sure that nothing happens. It’s priceless.”